While the lands of most national parks are set aside for their beauty, Mesa Verde National Park was particularly set aside for its historical resources; it contains spectacularly-preserved cliff dwellings of the Ancestral Pueblo People. These remnants from the distant past are so stunning and valuable for understanding human history that the United Nations has designated the park as a place of cultural significance for all the world, citing its ability to “provide eloquent testimony to the ancient cultural traditions of Native American tribes.” 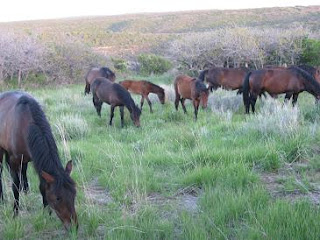 Colorado, not far from the Four Corners. After arriving in the park and enjoying a rotisserie chicken dinner carved by Dr. Carriker himself, we stayed the night in the Far View Lodge. From there we had a panoramic view of the park from which one would not guess of the prehistoric remnants that lied beneath the horizon. At dusk and dawn we could encounter roaming horses that wondered and grazed near the lodge. The next morning we ventured into the park to take ranger-guided tours of two of the ancient cliff dwellings the southeastern corner of the park.


Our first stop was at Cliff Palace. The largest dwelling at Mesa Verde, the palace has about 150 rooms and served as a large village for the Pueblos who built it around 1190-1270 AD. Our second guided tour was of Balcony House. It was a smaller site (around 40 rooms) and was more difficult to access, requiring us to climb ladders and traverse through tunnels to get in and out. There a ranger explained how the Ancestral Pueblos took advantage of cliff dwelling life. The cliffs provided shelter shielding its inhabitants from the harsh desert heat. They secured a water source at this particular dwelling from a natural spring in the cliff walls, the result of rainwater seeping through the porous rock on the ground surface above. Up on the surface, where generations of Pueblos had lived before living in the cliffs, they continued to maintain crops of corn, beans, and squash for their diet.

Walking within these sophisticated and intricate strictures gave me a sense of the lives that peoples of the Southwest lived and connected myself to a distant chapter of the human past. It's often easy to take for granted the benefits of the modern world. Seeing how the Ancestral Pueblos built up these dwellings over a century of tedious construction, slowly securing the basic necessities of life in such a dry hot climate, was a testament to human ingenuity.