On Monday May 23rd we visited the Bandelier National Monument. The site was notable for many reasons, but the lesson that stuck with me was actually unrelated to the historic dwellings. 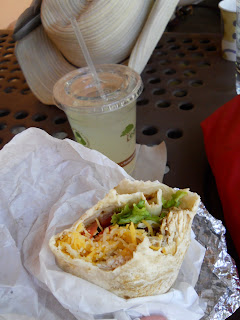 As it turned out, the chicken burrito was delicious, and was exactly the kind of portable meal I needed as our lunch was cut short so we could return to Santa Fe for our next program.

I have never been much for “serendipity” as a concept, but I do believe everything happens for a reason. Unexpected bathroom breaks with disgusting toilets put the later primitive toilet facilities in perspective, and outdoor hotel pools provide the warmth of camaraderie at poolside tables even when it's too cold to go swimming. Being flexible and open to new experiences is a key part of any adventure, especially when you least expect it.

And sometimes, even though you think you want a salami sandwich, what you really need is a chicken burrito.