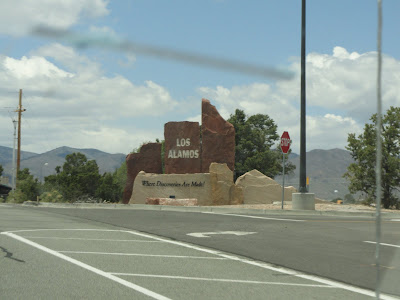 From its inception, Los Alamos inspired a level of mystique that was only furthered by its secrecy and location. The remote high-desert mesa provided the requisite security for the assemblage of a secret atomic bomb. One of several laboratories responding to President Roosevelt's demands for increased research in nuclear weaponry, Los Alamos was a direct result of the development of the Manhattan Project. These sites represented the unification of projects that were scattered at universities across the country.


The United States government took possession of the site at Los Alamos early in 1943, as it waited for a local boys' school to close term. Two years later, in July of 1945, the first atomic test occurred. Scientists detonated the project Trinity above the desert floor. Conservative estimates stated the bomb's explosion carried the force of ten thousand tons of TNT. The lab constructed the bombs Fat Man and Little Boy which were used against the Japanese cities of Nagasaki and Hiroshima later that year. The national laboratories at Los Alamos contributed directly to the ending of World War II in the Pacific Theatre.
Because of the secrecy of its work, staff and soldiers at the laboratory were urged to make minimal contact with the locals of Santa Fe, New Mexico, but the movement of a huge number of people and tons of construction material into a fairly unpopulated area outside of town did not go unnoticed. As those encouraged to blend in often are, the scientists and employees of Los Alamos were easily noticed by Santa Fe's citizens. An awareness of its secretive nature aided in the development of a mythological array of ideas regarding its actual purpose. After the lab was recognized as the site of development for the country's first nuclear weapons, its mystique only grew. Standing less than five miles from Ancestral Puebloan ruins, its very nature stood in contrast with the ancient desert.

Today, Los Alamos appears as nothing more than a small community with an atmosphere similar to a college town. Its numerous parks, offices, and fast food restaurants have all but robbed it of its mystique. The national laboratories still operate there, but have branched out to other projects, such as mapping the human Genome. If you were dropped in the center of town without any knowledge of your location, your last guess would be the town that constructed a nation's early atomic arsenal. There are no mushroom cloud monuments or road-side signs pointing out where Oppenheimer stood as he gauged the whether to build a laboratory there. Los Alamos is a city that is assuredly aware of its past, but does not market itself as the birthplace of the atom bomb.

- Daniel Manuel
Posted by History on the Move at 11:09 PM

The unpopulated area is being developed into something and surprisingly, the people near it doesn't even know that the construction is on-going.
home renovations in perth