"Music is the Language of the Soul" - The Musical Instruments Museum in Phoenix, AZ 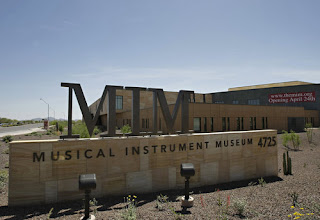 On June 4th, we visited the Musical Instruments Museum in Phoenix, Arizona, and it was one of the most unique experience I've ever had at a museum. "Music is the Language of the Soul;" this trademark of the museum has essentially become the thesis it endeavors to prove through the course of its exhibits. The MIM allows its visitors the ability to actively engage in its displays. Organized into continents and then further broken down into countries and ethnic groups, the instruments and information are effectively and cleanly presented and includes audio and visual clips that demonstrate the various styles of a particular region. The audio tour allowed us to walk at our own pace and was completely hands-free; as one walked up to a display, the LCD screen for the visual would turn on and the audio would start. The effective organization of instruments coupled with its ability to engage its visitors allowed me to make leaping connections. For example, I went through the Asian countries and stopped at the Japanese display. I learned that the blind were highly-respected teachers in the realm music, as they were considered to be more in tune with the spirit world. I later went on to peruse through the European countries and was very surprised at what I read at the Ukraine display. In Ukrainian culture, the Kobzari were blind minstrels that wandered through marketplaces and fairs, performing traditional Christian songs and epic poems. These minstrels were also highly-revered, as they were thought of as direct portals to the spiritual world. I found it intriguing that these two countries, who have had virtually no contact with each other, could share such a similar musical and cultural belief.


Music also proves to be the means to reach the soul when creating a national identity. During the course of the museum, I read countless examples of how a country's traditional songs - or even an instrument, itself - have incited nationalism in its people and have even become national symbols of a country. Ireland in the year 1916 comes to mind; traditional music as well as literature depicting a heavily-romanticized Ireland were used to rouse nationalistic sentiments as it sought to oust England's oppressive presence in the country. The founding songs of the canon of American music "My Country 'tis of Thee," "America the Beautiful," and "the Star-Spangled Banner" were all used as a way to appeal to the soul and create a sense of pride in their singers and are still employed today to do the same.

The Museum certainly appealed to my own soul. I was struck by the richness and passion imbued in the music with each country's exhibit I visited. It is amazing how much one can learn about a people simply by listening to their music; I could hear a history, a plight, an emotion, and a character in many of the traditional songs. Music transcends oral language and breaks down cultural barriers to convey a message uninhibited by the limits of spoken words. Thus, based on my own experiences, I believe that the MIM effectively proved its thesis.

Below is a compiled list of songs and pieces that I particularly loved. Check them out!
"Rushnyk" - traditional, Ukraine

Kristen Hunter
Posted by History on the Move at 11:51 PM