Second Star on the Right and Straight on 'Till Morning

In J.M Barry's Peter Pan, Peter and his friends live in Neverland, never growing up and having adventures forever as children. As Peter learns in the course of the story, we all have to grow up sometime. But that doesn't mean we have to lose our sense of wonder or our thirst for adventure.

One of my favorite parts of this trip is rediscovering that sense of child-like excitement and pursuit of new heights. On Friday May 27th, and Saturday May 28, we climbed among the red rocks just outside Moab, UT. 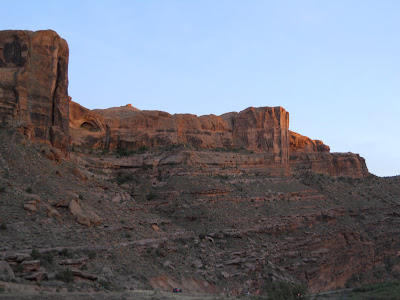 In scrabbling over the rocks, seeking hand- and footholds in the crumbly sandstone, I realized just how much I miss climbing trees and jungle-gyms. In my pursuit of success in the adult world, I had somehow left behind the simple joys of ascending physical heights through grit, determination, and creativity. Cuts and bruises are badges of honor, and just when you think you've reached your limit, you see another opportunity to go higher, and you can't resist the challenge!

Early Saturday morning four of us climbed up the cliffs near Moonflower Canyon. We climbed to the top of the bluff overlooking the Colorado River. Not only could we see tiny figures in the campgrounds, we could also see petrified dunes, remnants of the ancient oceans which once covered the whole area. 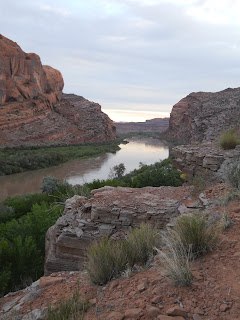 Neverland is a mythical place, but standing on the edge of Moonflower Canyon, I felt like I was in a place out of time. The past and the present came together in a space that challenged and thrilled me, yet also represents a place relatively unchanged for thousands of years. In climbing the red rocks, I rediscovered my childhood love of climbing, and gained a new perspective on the youth of the cliffs themselves.