With the bombing of Pearl Harbor on December 7, 1941, Americans were thrust into World War II and faced an uncertain future. Fearing Japanese saboteurs along the West Coast, and wary of further surprise attacks, on February 19, 1942, President Roosevelt issued Executive Order 9066, authorizing the military to round up Japanese immigrants and Japanese Americans into internment centers. First gathered at “assembly centers” in cities along the West Coast, the internees were then sent to ten internment centers located in California, Utah, Arizona, Arkansas, Idaho, Colorado, and Wyoming. These camps were in operation from 1942 through 1945, though the closures differed from camp to camp, and some did not close until 1946.

Although in documents from the period sometimes refer to the internment centers as “concentration camps” there was only a slight superficial resemblance to the infamous Nazi death camps for which the term is known. Rather than loss of life, the internment camps primarily served to permanently alter the lives thousands of Japanese and their families. The goal was to contain potential enemy agents not to destroy anyone, but by forcibly removing people from their homes, their jobs, and nearly all their worldly possessions, and sending them to the desert to live in isolated communities, the government irrevocably changed the fate of the internees' lives.
The Gila River War Relocation Center internment camp in Arizona is preserved as a historic landmark, commemorating the injustice of the internment. There is also a memorial marker recognizing the Japanese-Americans who nevertheless joined the army and fought and died for the very country that was oppressing them. The site is operated by the National Parks Service, though only a few physical ruins remain, such as concrete slabs marking where the buildings were. 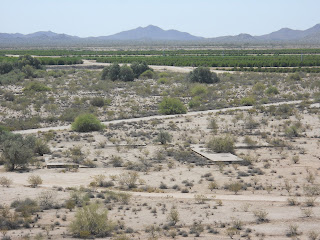 We had the opportunity to visit the Gila River camp or at least the long-abandoned site, now in ruins. For such an important piece of American history, the site is rather difficult to access. Thanks to Dr. Carriker's research, we had directions to the site, but the route took us on crude gravel and dirt roads, in between a pecan orchard and other farm lands, out to what appeared to be the middle of the desert outside Tempe, AZ. Of course, we could see cities in the distance, but there was nothing around the location of the camp but saguaro cactus and scrub land.

The memorial itself, white cement in a half-circle around a plaque describing the camp, was remarkably unscathed, given its remote location and the broken beer bottles we saw in the area. There was another plaque listing the names of the Japanese Americans who served in the Army, after the 9066 order was amended to allow it. Someone had placed flowers, with red white and blue bunting around them, along with a small American flag on the information plaque, which struck me as somewhat out of place. Given that it was the American government who had forcibly relocated the hundreds of thousands of people with no proof of any sabotage at all, the symbol of American freedom and democracy seemed rather ill-suited to rest on the plaque. One member of our group decided to move them to the memorial plaque for the soldiers, which I thought was a much more appropriate place for them, more respectful to the spirit of the marker. These men were the true patriots, who fought for the ideals of their country even when they endured the discrimination those ideals preached against.

The Gila River center was opened in July 1942 and closed November 1945, hosting 13,348 internees and staff at its peak in two camps, Butte and Canal. The memorial lies on a ridge in between the two areas, but it is primarily the area to the right of the marker where the physical evidence of the camp is most obvious, the remains of Butte camp. The camp was one of the largest internment camps of the Japanese, and together with Canal camp contained several schools for the interned children, as well as housing, a hospital and clinic, and five churches which according to the plaque served Buddhists as well as Christians. Despite these amenities, the living conditions at Butte and Canal along with other internment camps were far from ideal, and families often had to eat at mess halls and share shower facilities. The internees had to adapt, and the responses varied.

Part of the trauma within the camps was the internal conflict among the internees, with instances of resistance in several camps where segments of the internee population revolted against the administration and restrictions of the camps. If the rebellion was severe enough, the instigators were removed and sent to smaller camps far away from the larger population of internees. On our drive through Utah we stopped at a marker for the Dalton Wells concentration camp, operated from January to April 1943 and housing 39 men sent from other camps, including Gila River. Although this center was more restrictive and designed for “troublemakers,” there were no fences or barbed wire. The desert served as prison enough to keep the men confined to the former CCC camp converted to the army's purpose.
Although in theory the internment was the result of “military necessity,” historians have discovered evidence that suggests it was a combination of wartime hysteria, underlying racism, and in some instances greed that drove advisers to suggest Executive Order 9066 leading to the internment of Japanese immigrants and American citizens of Japanese descent. It was not until the late 1980s that the United States government officially recognized the physical and emotional suffering caused by the internment and apologized, offering reparations to the living internees and to their families.

The cement remains at the Gila River internment center along with the monument stand in witness to one of America's darkest hours. It is not a pleasant event to recall, but it is important that people learn about what can happen when our baser emotions lead us, especially in times of war. Hiking around the site in the 100 degree weather, I tried to imagine moving from the coast of California to the middle of Arizona. I could only conclude that no matter how many baseball fields the internment center had, it would still feel like I was being punished for a crime I didn't commit.

History on the Move said...

Excellent post. This was fantastic site to visit. The memories were palpable.