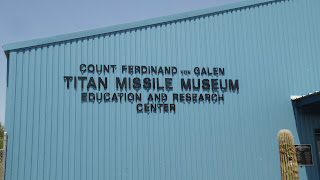 After visiting Los Alamos, New Mexico, where the Atomic bomb was essentially invented, and then the Nevada Test Site, where it was tested and perfected, History on the Move’s next stop was inevitably the Titan Missile Museum, the site of the only publicly accessible Titan II missile. A 103 foot tall intercontinental ballistic missile, the Titan Missile Silo was designed to be used after a Soviet first strike. 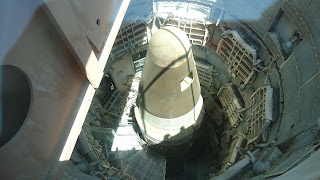 Our group watched a detailed video at the museum and then were led on a tour of the silo.  We learned that the Titan II was a 9-megaton bomb that could launch in 58 seconds. While the site was active, from the 1960s to the early 1980s, crews of four men and women worked 24 hour shifts locked behind three blast doors that weighed 6000 pounds. 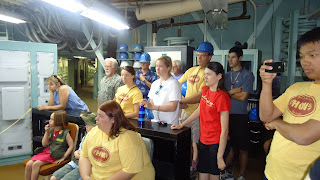 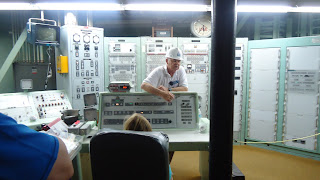 In order to launch the missile, an order from the president would come and be double checked before beginning the sequence. The main crew member would have to turn his key for five seconds while the assistant turned another simultaneously. Together, the two could launch the missile, but doing so required both to turn and hold their keys. Also, a six digit code was required in order to actually launch the missile. To ignite it, a propellant mixture of fuel and oxidizer had to mix from four separate valves. To ensure that the missile was not launched except under explicit presidential order, only the code could unlock a butterfly valve allowing the fourth valve to release its mixture and, thus, launch the missile. Crew members had six tries to get the code right. If they didn't get it right after six tries, the system would automatically shut down.

The entire site was designed to withstand both a nuclear attack and a missile launch. The blast doors were made to shield the crew and the missile itself from a nuclear attack above ground. Most of the interior is suspended on springs, including the lights, to protect the facility and the warhead from a blast. 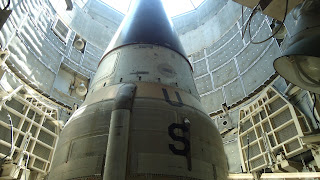 -Hilary Castles
Posted by History on the Move at 10:28 PM