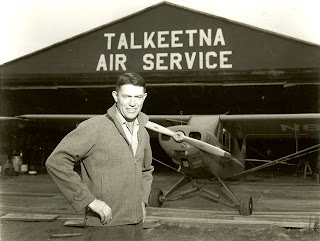 What exactly does a bush flying entail? It’s navigating aircraft through harsh, remote areas and landing in places that are ill equipped for planes. That sounds like most of Alaska to me.

Born in 1921, Don Sheldon came to Alaska after being raised in Wyoming, still filled with the pioneering spirit of the West. He and a friend spent all the money they had to go as far north from Anchorage as they could, and ended up situated in the small town of Talkeetna. A hot spot for flightseers, climbers, and other enthusiasts going to Denali (Mt. McKinley) National Park, Sheldon eventually established the Talkeetna Air Service. Don faced challenges in the first few years, crashing a plane in 1950 and losing his business partner to a crash in 1951. But he soon started flourishing, taking on two flights a day at times, and established himself as a legend in a business “where four out of five people failed” (1). 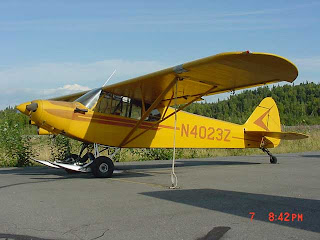 In 1955, Don met mountaineer and photographer Bradford Washburn, who needed someone to get close to Denali (Mt. McKinley) so he could use aerial photography to map and plan expeditions. Coincidentally, Don had just acquired a set of retractable skis for his Super Cub, which were perfect for landing on the “upper glaciers of Mt. McKinley and its neighboring peaks” (1).


Don learned about glacial landings from his father-in-law, Bob Reeve, who was himself a famous Alaskan pilot and founder of Reeve Aleutian Airways, and also worked with Bradford Washburn. Sheldon and Washburn would work together for over fifteen years. 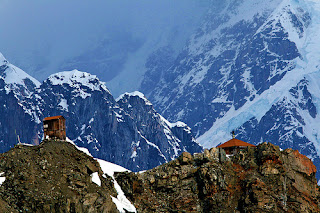 Sheldon is known for his daring endeavors, delivering supplies, ferrying climbers and adventurers to inaccessible places, but also is remembered for a mark he left on Denali...literally. In the spring of 1966, Don began building a “mountain house”, a small cabin meant to provide shelter for pilots and climbers in bad weather, and for those exploring the “then-hidden areas of the Alaska Range….At a time when few men dared to their aircraft onto the [Ruth] Glacier at all” (2), Sheldon supposedly strapped lumber to the outside of his plane and maneuvered many difficult landings to build the small house. It stands at 6000 feet on a granite ledge on Denali. After Sheldon’s death, the National Park Service renamed the valley surrounding the “mountain house” after the famed pilot, calling it the Don Sheldon Amphitheater. 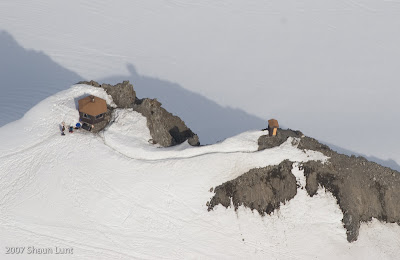 Don also helped in countless search and rescues involving climbers and other downed aircraft including military planes. His first military rescue in 1953 saw Don flying through harsh conditions while looking for the downed Air Force C-47. After two days, he spotted three survivors, and brought a doctor and supplies on his return.

What I enjoyed most was that he so unselfishly offered his services to those in need. There are several accounts of him making an unheard of flight manuever in order to rescue climbers, ship wrecked boaters or lost hunters. Almost every effort to climb the mountain ranges around Talkeetna including Denali (Mt. McKinley) during the period of 1940 - 1970 likely involved this world renowned bush pilot. Sheldon was heralded for his amazing ability to land on the sides of mountains. Most of his career was spent flying people to some of the most remote locations in Alaska.  (Source)

He wasn’t always battling the forces of nature under such dire circumstances, and more often than not was delivering supplies or dropping people off.  Don held an almost unparalleled understanding of the conditions on and around Denali, factoring meteorology and topography into his flights and rising in the ranks of the elite Alaskan bush pilots. His story, on display in a large section of the Talkeetna Museum, caught my eye as an array of photographs from glaciers, mountains, and runways littered the alcove. As many might say, he is the stuff of legend, and his adventures deserve to be shared. 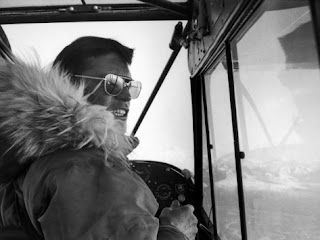 When I get home, I’ll be adding Wager with the Wind (3) to my reading list, to learn more about a man who had a hand in the exploration and conquering of the Last Frontier.

Further Reading:
(1) http://www.sheldonairservice.com/don-sheldon
(2) http://www.talkeetnaroadhouse.com/flightseeing.htm
(3) Wager with the Wind on Amazon
Posted by Hilary Castles at 3:18 AM