As the saying goes, “Everything is bigger in Texas.” Since I’ve arrived in Alaska, I have come to understand that this saying is a lie evilly-crafted by bitter Texans who lost their title as the largest state when Alaska gained statehood in 1959. The truth is, things are so much bigger in Alaska—the food, the miles, the stories, the mosquitos, and mendacities (grâce à Dr. Carriker).

I participated in HOM: The Southwest last year, and the food was unbelievable! Thinking about the foodways in Alaska before I arrived, I have to admit, I was underwhelmed. All I could think of was salmon, halibut, and an array of gamey meat. Thankfully, I was completely wrong, and everything I have sampled so far has been delicious! At the Anchorage Market, we were able to taste some of the local dishes, including a HUGE Salmon and Reindeer Quesadilla. The enormity of the quesadilla gave rise to the idea of “Alaska Size.”

Alaska Size also extends to mountains and trails. For example, at Fort McGilvray at Caine’s Head, the steep hike to the top was punctuated with signs, indicating how far we had come. We breathed a sigh of relief once we reached the one-mile sign, as this meant we were a third of the way to the top. We were perplexed and dismayed, however, when we arrived at the next distance marker to read once again, one-mile. We could only conclude that this was an Alaskan Mile, because after all, things are so much bigger here. 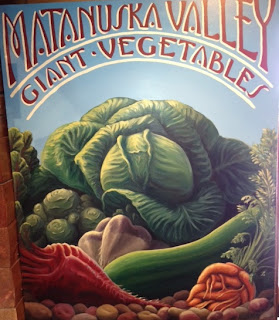 Alaska must have had an effect on Dr. Carriker as well, because even his tall tales (he’s infamous for them, just read his Wikipedia entries), grew taller. First, he assured us that Flattop Mountain was going to be an easy hike. It was one of the hardest hikes I’ve ever done. With parts of the trail completely overrun by rocks, I found myself straight up rock-climbing to the top and crab-walking to get down.
Next, he told us that the hike to Fort McGilvray on Caine’s Head would be a “leisurely walk.” We stomped through mud that was ankle-deep, crawled under fallen trees, and at points, the trail was so steep that I used my hands to make my way up. Robyn, Breanne, and Sarah V. even made a video will.

Once before the trip, Dr. Carriker had some of the students over to his house for fry-sauce night (a throwback to HOM 2011 in Torrey, Utah). I showed up in a t-shirt, shorts, and chacos, and he assured me that I was perfectly dressed to meet the Alaskan weather. Luckily, I didn’t listen to him, because it has been consistently rainy and bone chillingly cold. When it came to Six Mile Creek, he told us that the rafting trip would last 2 hours and that there was no need to bring a change of clothes – our dry suits would work just fine. Our trip lasted 3 hours, and my clothes were completely soaked. Oh, and Six Mile Creek was actually 9 miles (again, Alaska miles!).

While both Alaska and Dr. Carriker have continued to keep us guessing, they have coaxed us to move out of our comfort zones, and in doing so, we have learned and gained so much more from our experiences. I cannot wait to see what the rest of the trip has in store for us. We leave tomorrow to go camping for 3 nights in Denali National Park. Hopefully, we do not encounter Alaska-sized bears.