Bears: The Titans of Alaskan Wilderness

With an estimated 30,000 brown bears and 100,000 black bears statewide, the bear has become an icon of the Alaskan wilderness and North American wildlife.  Stemming back from their native interpretations as both a god and spiritual being, bears have always been a formidable and ferocious predator. Even with the invention of  firearms and modern hunting, bears are still considered the top prize of big game hunters.

Of the black bear and brown bear, the black bear is the smaller of the two usually weighing between 200-600  pounds. The brown bear is usually 500-900 pounds, but some can reach up to 1400 pounds. Bears spend most of their time searching for food, as they attempt to built up fat deposits for the coming winter. Notable differences between the two are the characteristic hump of the brown bear and the size differences. Color is not as useful because black bears can often be a light brown or even gray or white, and brown bears can range from dark brown to blonde.

The black bear is mostly isolated to North America, while the brown bear exists as multiple sub-species many of which are localized in Asia. The two sub-species that call Alaska home are the Kodiak bear, named so because it solely inhabits the Kodiak Archipelago, and the Grizzly bear, named for its “grizzled” fur in which the hair is lighter at its tip. Bear populations in Alaska are considered healthy and as long as they are properly managed allow for both hunting and viewing opportunities to the public. For instance, it is “illegal to kill cubs and females with offspring”. These types of regulations allow for the responsible management of bear populations and ensure both human and bear well being.  Alaska holds 98% of the U.S. brown bear population and 70% of the North American brown bear population.  Because of this, ensuring the well-being of these animals is extremely important to both the state of Alaska and the U.S. as a whole.

Another bear species, living along the North Alaskan coastline, is the polar bear weighing between 900-1600 pounds. Due to both human “over-harvesting” and recurring climate change, the polar bear populations have steadily declined in the last 50 years. This has led the U.S. Fish and Wildlife Service to consider the polar bear threatened under the Endangered Species Act.  Measures are being taken to protect the polar bear including joint agreement between Russia, Alaskan Natives, and Americans. In 2008 it was estimated that between 20,000-25,000 polar bears still exist in the wild. To see how you can help go to savethearctic.org.

Bears are mostly solitary creatures, staying away from humans and even other bears. Some exceptions include mothers with their young and multiple bears congregating around a thriving food source (e.g. a river abundant with salmon).  Improper storage of food or trash can lead bears to wander into human settlements or camping grounds. It is in fact not only illegal to feed bears in Alaska, but even to kill a bear that has been attracted by food or trash not securely stored. The reasoning behind this is that once a bear is given human food it can become conditioned to be both dependent upon that food and to frequent human dwellings more often. 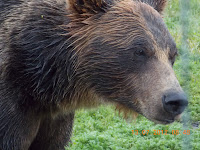 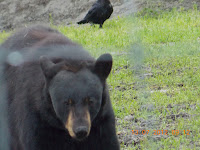 Bears are an important economic and subsistence resource for all Alaskans, especially Native Alaskans. Hunted for both fur and food, the bears in Alaska are used for a multitude of things including clothes, blankets, and even Native American jewelry. At the same time viewing these beautiful creatures is something both rare and exciting. By establishing national parks and preserves, monitoring population counts, and regulating hunting; the bears of Alaska can remain protected in the future.  History on the Move represents the reality that these beautiful and important bears are a natural and integral part of the United States. This is why the program advocates domestic travel over foreign travel, because these bears are not something foreign. They are American. They are as much a part of this country as any human, and they deserve to be respected and protected by the citizens of this nation


During my time in Alaska, we were fortunate enough to see black and brown bears both in the wild and in the Alaska Wildlife Conservation Center. Sadly, we were not able to get a glimpse of any polar bears due to the fact that we only traveled as far north as Fairbanks, Alaska.  We spotted the black bear as we were walking along a trail at the Eagle River Nature Center. Rounding a curve of the trail, we suddenly found ourselves face to face with a female black bear standing on its hind legs. To the inexperienced this may seem like a threatening position, yet in reality the bear was only trying to get a better look at us so she could protect her young cub. While our tour guide was trying to get us to continue on the trail, past the bear and out of danger, I found myself far more worried about the little zipper on my camera bag. After finally freeing my camera, I began frantically taking pictures. Unfortunately, the bear had already retreated deeper into the woods. I managed to get a couple shots, but nothing spectacular.

On the other hand, the Grizzly we saw in Denali National Park gave us ample time to capture her and her cubs on camera. She was much further away from us than the black bear, yet this distance allowed us to safely watch and observe. We even got to meet with a bear biologist who works with the parks monitoring and maintaining the bear populations. One of her jobs was to tranquilize and collar the bears with radio transmitters so they could track its position. She knew all sorts of things about bears and even had a great story about a bear who woke up as she was trying to collar it.

While we did see both bears at the conservation center, I found watching the bears in the wild to be far more enlightening. To see these bears as they should be, completely wild and completely free, helped me further appreciate how remarkable and beautiful the natural world is.  Watching that Grizzly guide its young through the open tundra, I could not help but feel overwhelmed by not only its presence, but what it represents. For me the world does not exist in cities, and malls, and restaurants; but out there with that Grizzly. That is where life truly begins and ends. That is where the magic of being alive really lives. This experience has made me feel something I cannot explain, but will always remember and go back to. I know that no matter what, that mother and her children must be protected. Because it isn't just about human life. All life matters and all life is beautiful. These bears offer a testament to that.

Tennessee is an excellent state to go bear hunting in. They have beautiful landscape and a thriving black bear population. You'll need to make sure you follow all regulations set forth by the Tennessee Wildlife Resources Agency when hunting bears. nuhunting