Penetrating northward into the eastern underbelly of Alaska's Kanai Peninsula is Resurrection Bay. Europeans used this inlet as early as the 1790s when the Russians briefly found it a safe harbor for shipbuilding, and recognized that the water there remains unfrozen throughout the year. The first permanent settlement within the bay, the port town of Seward, emerged in 1903 during the American territorial period.

In the middle of History on the Move's stay in Anchorage we drove to Seward from where we took a short boat ride down the coast of Resurrection Bay. We then took a leisurely hike to an encounter with some World War II history at Caines Head.

Caines Head is a pointed bluff that rises six hundred feet over on the eastern-central side of the bay. Today this tree-covered overlook is primarily frequented by recreationalists. However seven decades earlier, the overlook was fortified by the U.S. military for national security. In the 1940s, during America's involvement in the Second World War, this evergreen-topped cliff became of military importance because it penetrates far into the middle of the bay, making it an ideal lookout and defensive location. There, the Army constructed Fort McGilvray to protect Seward and the bay itself from enemy Japanese attacks.

Remnants of the fort still exist today as an abandoned maze of dark concrete hallways. Following a trail from our landing at North Beach we found the fort's entrance surrounded by years of forest growth.We explored the lightness corridors. 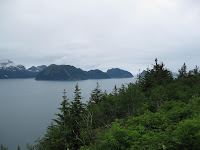 Interestingly recognition of Alaska's strategic importance came rather late. As Europe and other parts of the world had become engulfed in largest war in history in the late 1930s, powerful congressional and military leadership of the United States only hesitatingly turned their attention to the Alaskan Territory as a pivotal defensive location on the globe. America’s northern-most frontier did finally become an immediate concern in the spring of 1940 as Germany invaded and occupied Scandinavia, and Japan clandestinely advanced into the northern Pacific. Until that time Washington had stationed in Alaska only the most negligible defense, which amounted to about 300 troops and an underfunded and still-incomplete naval air base in the southeastern parts of the territory. The western regions remained unprotected and vulnerable.

By 1941, the U.S. had finally rethought its defensive efforts in the area but did so too slowly and was unready for the Japanese westward assault across the Pacific that began with the attack on Pearl Harbor. The following summer Japanese forces brought a small part of their campaign to the Aleutians, Alaska’s extension of small volcanic island that divide the Bearing Sea and Arctic Ocean from the Pacific Ocean. Japan successfully invaded two of the eastern islands, Attu and Kiska. Approximately 8,000 Japanese troops occupied these pieces of American soil for over a year, resisting American air and naval offensives to retake them. The enemy contingent on Attu finally surrendered to an American ground assault in May 1943. The larger stronghold on Kiska escaped to the sea in August on the cusp of a much larger Allied invasion.

During the tense period of Japanese occupation in the Aleutians was when Ft. McGilvray was established. Over 300 military installations like the one at Caines Head were constructed throughout Alaska after American entered the war. Though direct action was not seen in Resurrection Bay or anywhere on the mainland of Alaska after the Aleutian campaign the war effort left the territory significantly transformed. The large military build up thoroughly modernized the region and its infrastructure and population grew tremendously. Many roads, highways, large bases, and airports were built across the territory to defend the American soil and to coordinate with Alaska's neighbor-allies of the USSR and Canada.

It sure was fun to visit!