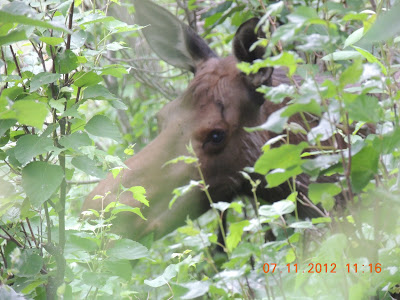 On our first day in Alaska we went to Earthquake Park. When we arrived all we saw was a small dirt path which we decided to take. There were signs along the trail of the earthquake in Alaska on March 27, 1964. Truthfully, I was still tired from the plane ride and I felt like I was sleepwalking so I wasn't really paying attention.

After the trail there was an open area with some sort of monument, but before we reached it a women walked up to our group and informed us we should be quiet because there was a moose down the ridge! Of course we all took out our cameras like crazy tourists and ran towards the edge of the area to take pictures of the moose.

We got a surprise when we saw that it wasn't just a moose but also her calf! There was a small trail on the edge of the hill behind a fence that we were able to get on. The moose and her calf were a little ways down the hill minding their own business and eating grass. Of course all of us are snapping pictures left and right and we were in no way prepared when the moose started coming up the hill. As she started up the hill, we jumped over the fence like flying ninjas and stated to run/back off. She stepped over the fence and just stood 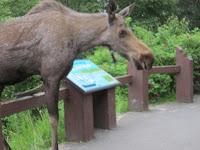 there about 20 feet away from us completely still until her calf came running up behind her. There we were, freaking out but still taking pictures like the complete idiots we were instead of fearing for our lives; they were just so enormous and beautiful that it was hard to think. Thankfully, the moose completely ignored us and just walked across some grass and started eating. The only problem after that was the fact that they were blocking our way back to the car for about an hour but getting to see them was worth the wait.

--Jessica Landry
Posted by History on the Move at 8:37 PM