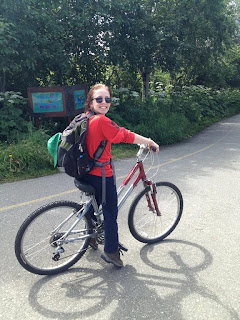 On Monday July 16, 2012, I discovered my hidden talent-- bicycling. I have been able to ride a bicycle without training wheels since I was four years old, but I never knew that I could cycle for seven miles at a pace that was anything but leisure. No, I did not finish first. I did not finish second. I did not even finish third. My placement does not matter to me. What makes it an accomplishment and a talent for me is the fact that I went out of my comfort zone and finished seven miles at a pace that I would have never imagined possible for me.

The day started off as usual: I woke up, I brushed my teeth, and I got in the van. We went to downtown Anchorage where we ate lunch and afterwards, we rented bicycles to go on Tony Knowles Coastal Trail. It is an eleven mile trail from downtown Anchorage to the chalet at Kincaid Park; however, we chose to ride three and a half miles before we turned around, totaling to a seven-mile round trip. We chose our bikes and started the ride. The second I got on my bike I rode into someone's bike tire and nearly died going down the first big hill. I predicted that I would be my usual self- a disaster waiting to happen. Boy, was I wrong! When I assumed we had completed a mile, I asked the person riding on the side of me exactly how far we had gone. I was shocked when she told me that we had just passed up the three-mile marker. I was so surprised! It was not like I had been peddling leisurely; I had been peddling at a pace quick enough to bring up my heart rate. I reached mile three and a half then turned around and peddled at an even faster pace all the way back. I was out of breath and red in the face but I still could have kept going.

The definition of talent is--natural aptitude or skill. I was the girl in elementary who always got picked last in P.E when we picked teams because of my lack of athletic ability. I have never excelled at any sport until now. It took me twenty-one years to find a sport in which I am talented.

--Robyn Bazar
Posted by History on the Move at 9:59 AM