Hiking is an awesome experience, one I have never had the chance to do,  until now.  This trip has  made me excited about doing things outdoors.  The first hike we accomplished, was the Flattop Mountain hike, which tested my limits.  There were a few times where I thought I should just turn around and not even think twice about it.  However, when I looked at the top and saw how it looked to be not that far, I decided to go for it, because I had already gone this far.  I have never hiked anything in my entire life, and at about ten o'clock in the morning on July 12, 2012 I was on the summit of Flattop Mountain. It was the most exciting thing, to look around and see the beautiful views and know that I made it all the way. 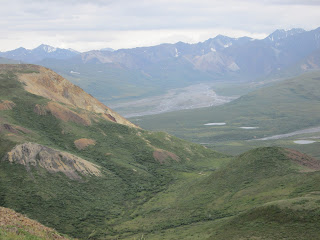 In Denali National Park, we went on two points, both in Polychrome Pass of Denali.  This time I used a trekking pole, which helped me a lot.  Once we got to the top of our first peak, I couldn't believe some of things I was seeing, the beauty was astounding.  I love being able to see these views, they are like works of art.  The view from the top is so amazing, it takes your breath away.  We then walked down that peak and onto another, one with rocks that you had to climb up, instead of the grass that was on the first peak.  The way up wasn't too bad.  Once we were up there, it was like a whole different world, seeing the glaciers on the mountain peaks, was an amazing view to see.  However, on the way down was a little tricky.  I ended up with a minor sprain in my left ankle.  The rocks were very easily moved, and it was hard to get a good grip, which is why I fell about three times, causing my ankle to sprain.  However, I do feel it was worth it. 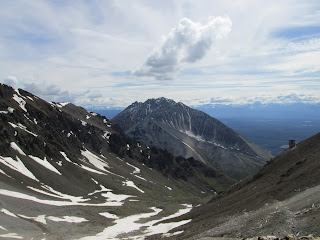 In Wrangell-St. Elias National Park, our group went to the Bonanza Mine, which is about 4.5 miles away from the Kennecott National Historic Landmark.  The entire way was at a complete incline, and very hard to walk up without taking breaks.  We had to walk around the backside of the mountain before ever seeing the actual mine.  After about two miles, we took a break for lunch.  From there, we could see the mine and we were heading for it.  We made it all the way to the Mine, and the view was amazing.  I have never seen anything like it.  The mine itself, however being naturally destroyed, was really awesome to see up close.  Although it was a really long walk, I wouldn't mind doing it again.

Every hike I have been on, the view was always worth it.