Most Historic sites in Denali National Park and Preserve include cabins, equipment, and landscape modification from the early part of the last century. Prehistoric sites are more difficult to locate. The sites generally contain only the stone tools as organic tools such as wooden spears, bowls, skin clothing, bone and antler tools have decayed over time. Denali National Park and Preserve contained 187 recorded cultural sites as of 1990. Eighty-four of the sites are prehistoric or proto-historic. Fifty-three of the 84 sites are surface-only lithic scatters and only twenty of the prehistoric sites contain isolated artifacts found on the ground. Based on archeological research this area has been inhabited by humans with many different cultures for thousands of years. The Denali area was historically used by the Koyukon, Dena'ina, Ahtna, Kolchan, and Tanana Athabaskan Indians.

One prehistoric site discovered at Bull River in Denali is the Prehistoric Upland Hunting site. Items that were discovered there are stone tools, fragments of stone spear points used to hunt wild game, a scraping tool, and flint-knapped debris. These items that were used thousands of years ago indicate that the people who once lived there were mining river cobbles and making tools from them. The Bull river site is the oldest site to be discovered so far in Denali.


Prehistoric items are still being discovered to this day. A recent discovery in May 2009 was a hunting artifact. It was discovered by park visitors along the gravel bar of the Teklanika River. The item discovered was a portion of a prehistoric Athabaskan arrow about twelve inches long. The arrow point is barbed and made of antler probably that of a caribou. The arrows of the Athabaskan’s were created to break apart once it was shot at an animal. The arrow is worn but still shows evidence that is was made by human hands.

During our stay at Denali we went with one of the archaeologist who worked there named Phoebe Gilbert. She took us to two prehistoric sites called Teklanika East and Teklanika West. It was an amazing experience. At Teklanika East we were able to see evidence of where Alaskan Natives use to shape their tools. Ms. Gilbert explained that they came here because of the amount of chert that was there. Chert was widely used by Alaskan Natives. She told us that to make a blade for one of their weapons or everyday tools they had to carefully hit the chert so that only tiny flakes would come off. Eventually they would shape it into a flint or blade. At a different site archaeologist found shards of chert in one small area but then found one piece that looked like it had been worked on but it was cracked several feet away. They assume that whoever was working on it probably got frustrated when it cracked ant threw it. I thought it was funny because I could relate and see myself doing something like that. Going back down the trail from the Teklanika East site was not so fun. It was kind of steep on the way down. One of the girls in our group mostly just sat on her butt and scooted down the trail. There were also at least a dozen bees just swarming the trail. I pretty much just covered my eyes, put my hood up, and walked through. Luckily no one was stung but there were a couple of screams. 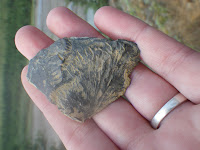 Next was Teklanika West which was beyond unbelievable. While walking on the trail in the site Ms. Gilbert found a uniface blade she estimated to be around 3,000 to 10,000 years old. She said the blade was probably a scraper that was used to detach animal hide from its body so that they could use it for multiple purposes. We were able to see first-hand the struggle Ms. Gilbert had to face, either to leave the artifact or collect it. She didn’t want to remove the artifact because it removes the context of the artifact and it ruins the integrity of the site. On the other hand she wanted to collect it because it was in the middle of a trail and someone could end up stepping on it or taking it home. She decided to take it because while she was debating a group of people walked by on the trail and probably would have stepped on it if she hadn’t warned them that it was there. All in all, to be there for a discovery and collection of an artifact was probably a once in a lifetime event and I am glad I was there to see it.

Jessica Landry
Posted by History on the Move at 1:45 PM