Russians were the first to "set claim" on the territory, that we now call Alaska.  During this time, Russians couldn't do much with Alaska, besides catch furs for the fashion industry. Although some Russians said that there was a little seepage of oil in southern Alaska, they didn't try to make anything out of it.  In about 1890, the first oil claims were made.  Although oil was being found, there was not enough of it to support the high cost of transporting it to make money.  The first productive oil was found in the Gulf of Alaska. When there was oil found in Prudhoe Bay, it finally was enough to generate revenue to pay for the transportation and still have profits.  Once this mass amount of oil is found, there was talk of a Trans-Alaskan Pipeline System (TAPS). 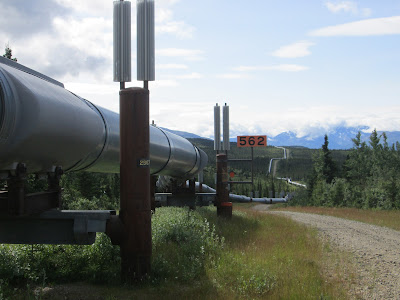 In April 1974, construction of this massive pipeline began (following that oil discovery in Prudhoe Bay in 1968). This pipeline is the only way to get huge quantities of crude oil from Prudhoe Bay, which is connected to the Arctic ocean, all the way to the terminal in Valdez, which is not only a port city, but an ice-free port. The Alaskan Pipeline is, according to Alyeska-pipe.com, an 800-mile-long steel pipe that crosses mountain ranges, rivers, and major earthquake fault lines. Alyeska Pipeline Service Company is the company that maintains and operates the pipeline.  This pipeline is not only important to Alaska's oil supply, but it is also important to the United States oil supply.  This pipeline alone accounts for roughly 20 percent of the United States oil production.  The construction of this enormous pipeline also required the construction of roads and extra facilities to manage the pipeline. The pipeline itself only took about 3 years to complete; the construction of everything for this pipeline ended in June of 1977.  The first time oil ran through the pipeline was on June 20, 1977.  And, finally, on August 1, 1977, a tanker was filled and pulled away from the station with its first round of Alaska crude oil from the pipeline.

This pipeline cost about $7.7 billion to build, and has transported at least 10 billion barrels of oil since its completion.  The state also decided that since this pipeline would generate a lot of revenue, to set aside some of the money for when it’s really needed, which is called the Alaska Permanent Fund.  It sets aside twenty-five percent of all mineral lease revenue.  Also, if there is a surplus in the revenue, it goes directly to Alaskan citizens.


The pipline actually had a spill in 1989, which was one of the biggest catastrophes in the oil industry.  This can connect to me because of the British Petroleum spill in the Louisiana Gulf.  However, the spill in Valdez was by the Exxon company. On March 24, 1989 the tanker for Exxon left the terminal in Valdez from the Pipeline, on it's way to Los Angeles.  It took a different route than normal because of  ice and went through Bligh Reef off of Prince William Sound, when it spilled 10.9 million gallons of oil.  The oil ended up spreading to be about 11,000 squared miles of the Gulf of Alaska.  In the 90's this was the worst oil spill to date.  Then, in 2010, the Deep Water Horizon oil spill with BP happens in the Gulf of Mexico, flooding our beaches with oil, just as it was in 1989 in Alaska.  I can connect with how people were feeling in Alaska about the Pipeline because of the deep water drilling that was going on in my part of the country as well.  However, oil companies are a big part of the income that comes into families, which is why oil companies will never stop drilling.  The pipeline also has faults, that people are scared will happen, such as, the bridges that are made for the pipeline to go over water, which if one collapses or breaks in any way, the oil will move quickly down the river and there is no stopping it.

It's good to hear that they maintain the good condition of the pipeline. I'm hoping that the 2010 oil spill incident last 2010 will never happen again cause it may post an effect to the overall community of the Alaska, may it be economically or environmentally.

With all the oil spill incidents that had happened in the 90s I’m assuming that the oil companies are smarter now compared to before to avoid those from happening again. These companies should take extra measures in implementing and/or putting up a pipeline in a certain area to make sure that everyone or everything lying in the place will be okay cause it’ll obviously make an impact to the economic status of the said place.