The History of Kennecott Copper Mill and Town 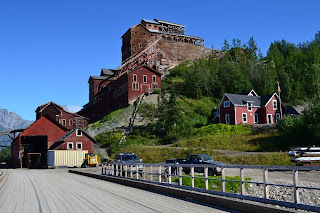 Today, I visited the Kennecott Copper Mine in Kennecott, Alaska.  Kennecott was a small town founded in the early  1900's by Jack Smith and Clarence Warner, two prospectors. The land was inspected by Stephen Birch. When it was discovered that the land was rich with copper, it became a boom. The next step was to build a railway to transport the minerals.  A local told us a rumor that the first transport in 1911 paid for all of the expenses put into building the town.  In 1938, the price of copper went down so the mill went out of business. The people of Kennecott abandoned the town by the time the last train came on November 11, leaving everything behind, including the dinner dishes on the table


Seeing the mine up close then hiking to the top of it was a step back in time. As I hiked up the hill to the top of the mine, I looked at the red paint and white window frames on the massive wooden structure, and I tried to put myself in the shoes of those miners.  The view was spectacular. Blue mountains in the distance and a peaceful waterfall a few feet away from the mine. A local who did maintenance on the building said he still finds  copper around the mine. He showed us a few pieces and even cracked one for us so we could see what the inside of copper looks like. There is about 60-70% copper and about 10% silver inside.

When the price of copper went down and Kennecott became a ghost town.  The last bus left on November 11, 1938. A man who has been working on the restoration of the mine said that people left everything exactly the way it was. My tour group was taken to a curatorium where we got to see the artifacts left behind. This was the most interesting part of the tour!  There were shoes, dinner plates still on the table, desks, lanterns, food, and anything else that people could not pack.  The miners were just leaving in a hurry to catch the last train.  They never anticipated that the mine and everything they left behind would all one day be part of a National Historic Landmark. Once it became a ghost town, people would walk around the town taking what they wanted from the buildings (some people have returned the artifacts once the preservation of the mill began), but for the most part, everything remained as original as the day it was abandoned.

It is now 2012 and there is a large team working to stabilize the structure.  This means that it will not be repainted and rebuilt.  Basically, the fourteen story structure will be stabilized enough for people to walk through it and see and feel the history of the century-old mill.

Robyn Bazar
Posted by History on the Move at 9:49 AM