Salmon: The "Little" Fish That Could

Salmon.  A unique word and an even more unique type of fish. Their uniqueness is owed to their interesting life cycle. Salmon are born in freshwater streams and make their way to the open ocean in order to develop and mature. They can spend up to a decade in the ocean before it is time for them to spawn. When this time comes, they migrate back to the same springs in which they were born to lay and fertilize their eggs. Their journey “back home” is quite strenuous because they must swim upstream to reach their desired location. Because of this difficult swim and the deformations they go through due to their switch from salt to fresh water, the adult salmon soon die after the eggs have been fertilized. How salmon know the exact location in which they were born is a mystery. The life cycle alone makes salmon an incredible fish, but their association with the expansion and development of Alaska increases their importance. 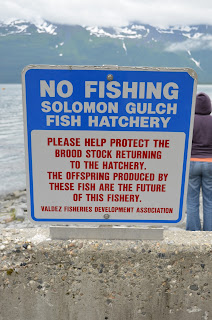 For thousands of years, Native Alaskans have relied heavily on subsistence fishing of Pacific salmon. It wasn’t until the intrusion of the United States that an industry was created for the catching and processing of these fish. The first salmon cannery opened in Klawock, AK in 1878 (akhistorycourse.org). Commercial fishermen invaded the traditional fishing grounds of different Alaskan tribes and depleted the salmon stock by using “deadly efficient gear, such as stationary fish traps and mobile seines” (Alaska 107). It wasn’t until 1889 that Congress passed a law forbidding the use of dams to catch salmon swimming upstream to spawn (Alaska 157). Regrettably, this law was hardly ever enforced. In 1903, the control of Alaska fisheries was transferred from the U.S. Treasury Department to the Bureau of Fisheries branch of the Department of Commerce and Labor, which eventually got permission to build two hatcheries in Alaska (Alaska 158). Luckily for the commercial fisheries in Alaska, the Bureau supported the use of traps and disregarded the law passed by Congress in 1903. This meant that the independent fishermen in Alaska would soon be out of business. It wasn’t until after Alaska became a state and the state government gained control of the fisheries that the use of traps was completely forbidden and the law was regularly enforced. Even after the abolition of traps, the salmon count steadily decreased. In 1972, a constitutional amendment put limits on entry into fisheries in order to conserve salmon (Alaska 259). With the help of laws passed by the state government, the amount of salmon entering Alaskan streams slowly increased. Unfortunately, Alaskan fishermen and packers still have trouble with salmon count today.

The number of King Salmon, or Chinooks, swimming upstream in Alaskan rivers statewide is extremely low this year (June 2012) compared to previous fishing seasons. Since the problem is statewide rather than only in one certain creek, biologists are led to believe that the problem starts in the sea. The problem could be current change in the sea caused by global warming, climate change, or commercial fishing. The problem with commercial fishing is the amount of salmon that cod and sockeye fishermen “accidentally” catch. The term “bycatch” is used, which inadvertently reminds me of the term “innocent bystander.” In an attempt to decrease the bycatch of salmon by cod and sockeye fishermen, the North Pacific Fishery Management Council voted to put a limit on the amount of salmon such fishermen can bycatch. In addition to this limit, regulators put a ban on subsistence fishing of king salmon because of the weak run they were having. The elders of the tribe Atkai told tribal fishermen to fish in an act of civil disobedience because salmon was a key food source for their tribe and they had the right to claim their food. As it was thousands of years ago, the Natives rely heavily on salmon and have always been aware of its importance. 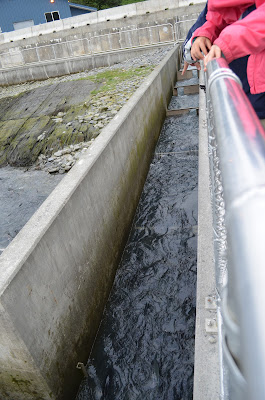 Hatcheries were made in Alaska in an attempt to increase the count of salmon that arrive every year. We visited the Solomon Gulch Fish Hatchery in Valdez, AK on our second to last day. It was amazing to watch the salmon trying to swim upstream over the dam, doing their best to find a place to spawn. There was a “ladder” that channeled the salmon and led them into the hatchery. This specific area catches mainly Pink salmon and Sockeye salmon. I’m glad I got to see how incredible these fish are. I’m also glad that I got a feel for how important salmon is to Alaskans.