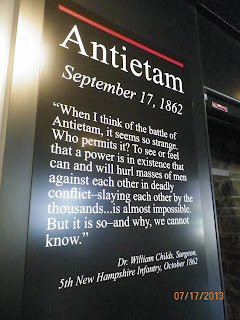 Antietam National Battlefield has been named the “Bloodiest One Day Battle in American History.” On September 17, 1862, General Robert E. Lee of the Confederate Army moved across the Potomac River from Virginia into Sharpsburg, Maryland. This battle started on a rainy morning right after dawn. The Union’s Army General, George B. McClellan, stood his ground as the battle lasted for one full day and ended in what could be seen as a “draw,” but only depending on whose perspective you see it from. This battle had the most casualties of any battle fought: 23,000 killed, wounded, or missing.


It is said that there were three major reasons for this particular battle including: the Maryland Campaign of 1862, the first invasion of the North, and the Army of the North in Virginia. The Maryland Campaign of 1862 was General Robert E. Lee’s strategic invasion into the North, which ended with the battle at Antietam. As stated before, this invasion was begun by General Robert E. Lee of the Confederate Army across the Potomac River. This battle is known for its history of course as the bloodiest one day battle in America; also because it led to President Lincoln’s issuance of the Emancipation Proclamation. This issuance also changed the purpose of the war making it a dual purpose: the preservation of the Union and the end of slavery as an institution. The proclamation reflected that President Lincoln had a new way of thinking about the conflict. Until this time, the war was only seen as a rebellion, a fight to preserve the Union without touching slavery. Lincoln had stated, “ If I could save the Union without freeing any slave I would do it; and if I could save it by freeing all the slaves I would do it’ and if I could save it by freeing some and leaving others alone I would also do that… I have here stated my purpose according to my view of official duty; and I intend no modification of my oft-expressed personal wish that all men everywhere could be free.” Now Lincoln was threatening to crush the Confederacy by destroying slavery, the entirety of its economy and way of life. Now the North was waging a moral crusade to free the slaves.
I call this battle a turning point mainly because President Lincoln issued the Emancipation Proclamation, but also because of what it meant for people fighting in the war. The proclamation allowed for all who fought to fight for more than just their nation as white people but for the completion of the entire nation. Many people will argue that the Civil War was not fought over slavery, yet the issuance of the Emancipation Proclamation will counter all arguments. The North made it their responsibility to fight for the freedoms of enslaved African Americans. This change meant a lot in regards of how it can be interpreted. Lincoln did not want to make freeing slaves a apart of this war and in the end it was what he had to do for the fight.


This battle and this place means a lot to me, mainly because I am an African American woman and if the Emancipation Proclamation had never been issued who knows where I would be today. Would I be allowed to go to on such a trip or to such a grand university or many of the freedoms that I enjoy daily? Maybe President Lincoln would have sent all African Americans back to Africa or maybe slavery would have pushed into the North, who’s to say what could have been? I am just hugely grateful that the battle could lead to such great movements in history. I am proud of my country to become a morally better place; I just wish that all of the soldiers who lost their lives fighting had not.  I wish that people who lost loved ones could get them back. I am sorry that my country had to go through things like this battle to get to where we are now.