Music of the South: the Blues


The discovery of the blues is often given credit to W.C. Handy who was a bandleader and music publisher at the time that he “discovered” the blues. Handy is now known to many as the “Father of the Blues.” He is said to have heard a man playing this sad music next to Handy in a Mississippi train station while he was sleeping (Oakley, 9). The home-less described man was playing his guitar with a knife and repeating the lines “Goin’ where the Southern cross the Dog” (9). The music took to his ears and Handy showed this music to the world. But the likes of the blues have been around long before Handy “discovered” it in 1903.

The blues is usually said to be traced back to slave days, songs of field holler, work songs and African spirituals. The work songs would be used to keep the workers all on beat by singing a song (37). African Americas would use work songs in places such as railroads when they would hit the nails into the ground (37). Blues singer Howlin’ Wolf said growing up they would have work songs for everything, they were working long days, they just made songs to pass the time but sometimes they would have purpose like calling the mules to pull the plows (37). We can also see the influences of slavery and hardship in the lyrical style of the music. With songs of “broken relationships, heartache, hardships, rootlessness and restlessness” (Gioia, 13).  The music was very “private and personal” (Jones, 82). They are songs of everyday life and the struggles that people go through, it is easy to see how so many people feel such a strong connection to the blues. An example of "broken relationships" can be seen in the song "How Blue Can You Get" by B.B. King when he says, "I said, I've been down hearted, baby, ever since the day we met; you know our love is nothing but the blues; how blue can you get?" The popular style of call and response where the singer will sing a verse and repeat it again right after is influenced by African communication methods (Gioia, 15). Another style believed to be an influence from slave times is the very low profile in drums in blues music; this is attributed to the restrictions on slave communities to use drums to communicate (16). 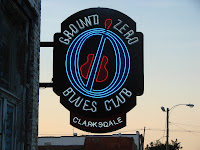 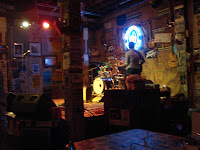 The blues is believed to come out the area known as the Mississippi Delta. The Delta was home to cotton plantations worked by slaves and later sharecroppers ("Trail of the Hellhound: Delta Blues"). In some parts of the Delta African Americans outnumber whites 5 to 1; there is a higher concentration of blacks than any other part of the country here (Oakley, 43). Blacks where here after the Civil War but even more moved here because of railroad jobs and sharecropping (43). The Mississippi Delta is believed to start at the lobby of the Peabody hotel in Memphis and end at catfish row in Vicksburg (Gioia, 6). It has produced artist such as B.B. King, Muddy Waters, T-Bone Walker, Robert Johnson, Son House and Howlin’ Wolf musicians who play that twelve-bar blues structure to a tee (6).  Most of these artists grew up with nothing as the south had and still has one of the highest poverty rates. They had influence in their everyday lives to write their songs about (Gioia, 20). The instrument picked up by most of these blues greats was not the piano but rather the guitar. When many African Americans began picking up the instrument they used fairly simple chords to play their blues, but as time went on the structure and complexity of their songs became more (Jones, 69). Many of these musicians knew neither how to read nor write music; rather they just picked it up till it sounded right. For this reason many of the songs are lost today. 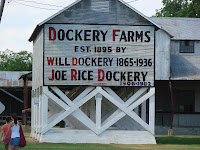 Dockery Farms, Mississippi is also a place said to be the home of the blues. Will Dockery founded Dockery Farms in 1895 to produce cotton. Many African Americans came to his plantation to work in the fields, as it was the highest paying plantation in the delta. Bluesmen would stop and play here because they couldn’t play their music anywhere else as the music would start fighting would ensue, which caused the cops to come. They needed a secluded place so Dockery Farms was the perfect place. It was home to some of the greatest blues players such as Charlie Patton who taught people like Robert Johnson, Son House, Willie Brown and Howlin’ Wolf how to play the blues. Charlie Patton was known to make up to $250 a night, which is equal to about $6,000 in today’s currency. Dockery Farms would be packed with people every Saturday night. Between 1900 and 1930 it was the place to be. When the musicians left they brought their unique style with them that has influenced millions today.

The Delta blues is described to sound more like the high-pitched field hollers. Many guitar players played with a broken bottle or knife and played their guitars as if the guitar was speaking back to them ("Trail of the Hellhound: Delta Blues"). The Delta blues is usually played in a 12-bar measure with a 3-bar AAB structure. The AAB structure is where the first line is repeated twice, either because the singer liked it or couldn’t think of another line, and the third like is something completely different (Jones, 62). 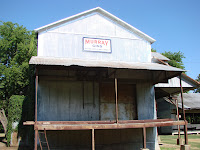 Between 1920 and 1930, 60,000 African Americans went north during the great migration in hopes of finding better jobs like at Ford, where Henry Ford promised his workers would make no less than $5 a day (Jones, 95-98). This migration north was caused by the Great Depression, which closed a number of recording studios in the south to close, causing many Delta men to hop the trains to Chicago. When leaving the south they also brought the blues with them. When African Americans move to the cities, an idea of “race records” became very popular and put the blues on the map (Jones, 99). The concept was recording black artist and aim record sales at a black audience. In time theses records became very popular with both black and white audiences. With the rise of the popularity of blues, other styles of blues also came out such as boogie-woogie, which played traditional blues riffs on the piano and was very popular after the First World War (Jones, 114-116). 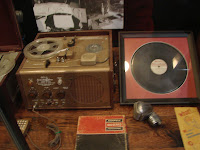 In Memphis the blues had taken to Beale Street, the cultural center for African Americans in the city. There was a saying that if you could make it on Beale Street playing the blues you could make it anywhere such as an actor on Broadway. The radio station, WDIA, was the first radio station in the south that played only black music. This spread the sound of the blues throughout the south, to black and white homes alike. This influenced many new musicians to start playing the delta blues. Sam Philips was a recording artist recording pop music. In 1950 he decided to put that all behind him and start recoding the music he loved, the music of Beale Street- the Blues. He soon started the Memphis Recording Service. He recorded the raw music that he loved the way he believed it should be heard. This was a big part in the growth of the blues in the south. Philips later changed the name to Sun Studios and founded huge Rock n’ Roll stars such as Elvis Presley and Johnny Cash.
Hearing the blues both in Clarksdale and Memphis was a great experience. In Clarksdale we went to a blues club to listen to the music. You could feel the vibes of all the history that took place in this town. Everything looked run down except for this blues bar which I think shows a great image of how important the music is to the city. Memphis was a city that was based off the blues. Everywhere you went they had the blues such as jazz to New Orleans. At the folklore place we learned and listened to the blues and I think it was a perfect way to go about Memphis. 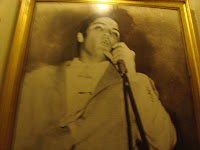