The National Archives is located in Washington D.C, which is also home to many other historically significant places. Washington D.C is our nation’s capital, and the heart of America’s history.  These archives hold, among many other things, governmental documents, lawful documents, procedures, and hold significant cultural value. Mentioned in Our NationalArchives, “Not only are these archives of great practical value; they also have an inestimable sentimental and cultural value. Such documents as the originals of the Declaration of Independence, the Constitution of the United States, the Emancipation Proclamation, and the Kellogg Pact give expression to the highest ideals and sentiments of the American people, and it is inconceivable that any thoughtful person could doubt for a moment the importance of preserving them.” It is extremely important to preserve these documents because once they’re gone they cannot be replaced. The National Archives makes this preservation possible. By taking “systematic care” of these artifacts, the archivists and employees at The National Archives have already helped to preserve some American history. These documents are so well taken care of that within their casing, they are virtually bullet proof and fire proof. It is impossible for them to be stolen or for them to be replaced with faulty copies. Some of these documents are of obvious importance, such as the Declaration of Independence, the Bill of Rights, and the Constitution. However, thousands of important documents are kept private for private study and some of those documents are classified. Some examples of documents not shown to the public include letters written by Thomas Jefferson, Abraham Lincoln, and many others. Some documents are scraps of paper, which look unimportant at first glance. An example of this is Andrew Johnson’s impeachment paper stored in the archives. The impeachment document is nothing more than a small scrap of paper, but it is the original and since it is a major contribution to American history, it must be preserved. The archives also hold unusual documents, such as a massive collection of comic books.
According to the archivists working at the Archives, the layout of the building is extensive and quite confusing. There are tiers, not floors, which intersect with each other at certain parts of the building, which makes it confusing for the workers to learn their way around. For example, one archivist mentioned that he had been working at the Archives for two years and still didn’t feel comfortable walking around the building alone, in fear of getting lost. Although the inside layout of the building is puzzling, the outside of the Archives is exceptionally traditional. It was built in the Greek revival style, and it strongly resembles the Parthenon. There are multiple columns that line the front of the building. The columns hold up a triangular top that is filled with engraved artwork. Most of this art is intellectual and symbolism for intelligence.  In 1934 John Russell Pope states, "The importance of a building to contain permanent records of the National Government, its . . . association with the . . . monuments of Washington, and its unique and prominent site . . . dictate the design, style, and character of the building." The majestic appearance of the building shows by passers its importance, even if those passing by do not know what the building holds.
The importance of the National Archives is equal to that of the Capital Building or the Library of Congress, two other buildings whose sole purpose is to ensure the preservation of our nation’s history. Almost every country has a type of national archives to store their information. One example of how important it is to keep this information safe is the destruction of the archives of Nicaragua in 1931. An earthquake destroyed the building that housed the national archives. After the earthquake, the building was in ruins and the archives were buried in the building’s debris. Unfortunately, the debris caught fire and all of the archives were completely destroyed. The archives hold a significant amount of data which, although slowly becoming digitized, cannot be replaced in their original form. If, for some reason these archives were lost, it would cause havoc among the people. In the article Our National Archives, Connor states, “They contain the evidence in support of the just claims which a citizen may have against his government, and they are the basis of the titles to millions of acres of land and to thousands of patent rights upon.” Our nation was built around this information, and it was lost it is almost certain that any attempt to rebuild it without the archives would be nearly impossible because there are hundreds of years of America’s development as a country encased in the archives. The National Archives of the United States of America is perhaps one of the most important and historically momentous sites in the country. 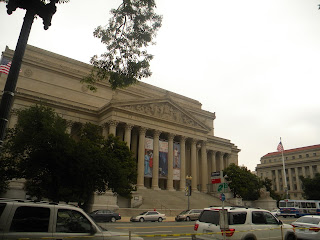 A front view of the National Archives building. 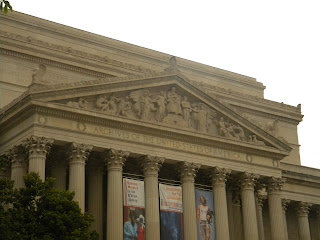 Top of the National Archives building, 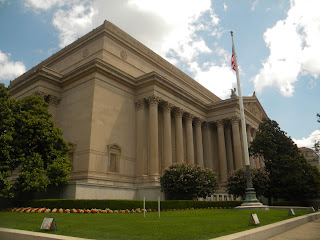 A side view of the National Archives building.