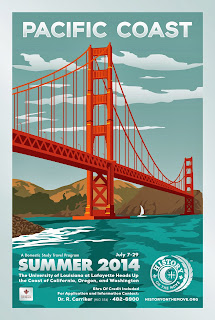 Students spend four weeks studying and experiencing the history, heritage, culture, natural resources and beauty of the Pacific Coast.  This is a hands-on and experiential approach to learning and gaining an understanding of this country's rich culture and our shared past.  The class will fly from Lafayette, Louisiana to Las Vegas, Nevada where we begin a three week journey across California, to San Francisco, then up the coast to Oregon and Washington State before flying home from Seattle.  Along the way the historic sites, museums, landscapes, and nature itself become our classroom.  We will meet with scholars, educators, and locals who'll speak to us about their expertise and offer insight into how they manage and interpret our history.  This unique domestic study-travel program is coordinated through the Public History Program in the Department of History at the University of Louisiana at Lafayette.

The cost of the 4-week program is $2,600 and includes 6 hours or college credit, transportation, accommodations, breakfast & dinner each day, and all activities (from museums and tours of historic sites to special excursions).


Posted by Robert Carriker at 5:35 PM

This is an amazing program. More amazing that you have university support for it. Are you open to working with other universities?

I heard about this program last year. I really want my daughter to go. Such a cool opportunity that ULL provides to students. Good job!

Great Post. Students spend four weeks studying and experiencing the history, heritage, culture, natural resources of the Pacific coast. I really liked it. I will share with my friends as it will provide great help. For more information visit here Terran Perry

Joy is also necessary with the studies. I really liked the post. I usually get such information from ESD Dallas